The Exchange Building in downtown Kalamazoo 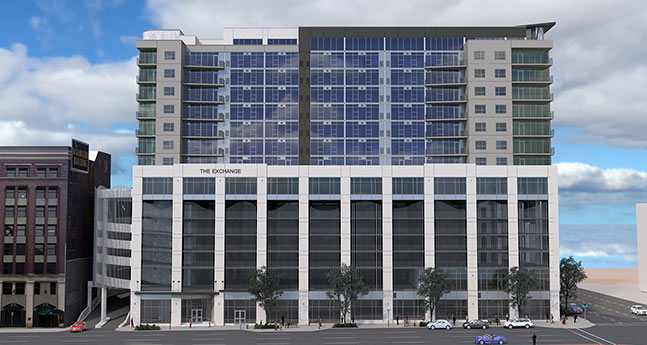 The Exchange Building, a mixed-use property composed of luxury apartments and commercial space was announced six years ago, in 2011. The property was purchased PlazaCorp (based in Kalamazoo) from the Jim Gilmore Jr. Foundation. According to its leadership, Jim Gilmore always wanted a major development to occur on this centrally-located downtown Kalamazoo parcel.

In 2011, when Brownfield tax incentives were first approved by the Michigan Economic Development Corp. for the project, The Exchange was set to cost $24 million with eight stories, 200,000 square feet, and about 50 luxury apartments as well as commercial / retail space and internal parking. As of the spring of 2016, the size of the project had increased to $35 million, 12 stories, with more commercial space, internal parking, and 140 luxury apartments.

Since its conception, the size and scope of the project has nearly doubled in terms of cost and square footage. The final cost of The Exchange will be $52.4 million. It will be 345,000 square feet with 60,000 square feet of commercial / retail space, 289 internal parking spots, and 133 luxury studio, one bedroom, two bedroom, and two bedroom plus office luxury apartments.

The development team involved with The Exchange, as includes Byce & Associates, Inc. providing architecture and engineering services, and Orion Construction for construction management services. The Exchange will take about two years of work in total, being completed in April to June 2019.

Interested in leasing a luxury apartment or commercial space at The Exchange?